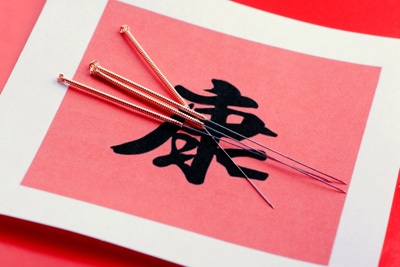 Many people who come in for acupuncture, rarely understand exactly how it works and they may have lots of questions.  That’s ok.  That’s also why an acupuncture degree is a four year Masters program.  The way conventional medicine looks at the body, health and healing is much different than that of East Asian Medicine, so it takes a little longer to understand the concepts and get a good grasp on how this medicine works.

When people ask “How does acupuncture work?”, it ends up being a complicated answer.  This is because acupuncture is an ancient, energetic, holistic medicine that takes into account all aspects of a person’s lifestyle and symptoms in order to make a diagnosis and treatment strategy.

Ancient Chinese Secret – The ancient Chinese healers developed theories, thousands of years ago, that explained how acupuncture works. They saw that acupuncture worked and instead of killing themselves trying to figure out why, they developed theories to fit the very real effects that they were seeing in their clinics. They did not have MRI’s, or chemistry, or computers, or even a thorough understanding of anatomy and physiology, as we know it today. So, they used concepts that they saw in the natural world around them and from their philosophies to describe the functioning of the body. Concepts of yin and yang balance, the flow of qi or vital life energy / essence that they thought ran through the body, were used to explain how acupuncture worked. When Yin and Yang were out of balance or the flow of qi was disrupted, disease ensued. They accepted what was, rather than spinning their wheels finding out the why because it did not really change anything.

Modern Day – Today, we have some concrete physiological reasons as to why acupuncture works. One of those reasons is that the acupuncture needle causes an immune response in the body. Just like if you get a splinter or a cut, the body will rally an immune response. Healing factors and enzymes are sent to the area to heal the damage.  And then those healing factors are sent to a large area (even to the underlying organs), since the surrounding area is on a shared blood supply.

Fascia or Connective Tissue – Fascia is connective tissue that runs throughout the body. It wraps muscles and connects them to our bones. It wraps our organs (including our brain) and is continuous throughout the body. Wrinkles, tears or other disruptions in this fascial system can affect any other area of the body, to a greater or lesser degree. Think of it like a bedsheet with a wrinkle. Trying to straighten the wrinkle at the spot of the wrinkle is a futile exercise. It’s much easier to pull the bedsheets from the opposite side. This is similar to how the fascial system is influenced through acupuncture. An area of the body that might seem unrelated to the area of the complaint (such as using the wrist to treat the ankle) is an example of this.

Nervous System – The human nervous system can be broken down into several divisions. One of these divisions is known as the Autonomic Nervous System (ANS), which deals with mainly involuntary actions and reactions. The ANS is further divided in to two divisions, the sympathetic nervous system and the parasympathetic nervous system. The sympathetic nervous system is known as the “fight or flight” division. This is your “adrenal” response, getting you ready to fight the bear or run away from the bear. The parasympathetic division is know as the “rest and digest” half of the ANS.  When your body is in parasympathetic mode, it is rebuilding and repairing itself. This is when cells divide, your immune system is rebuilt and strengthened and injuries are repaired.  And we are not only talking about major injuries.  Simply by walking around, doing our daily activities, we cause tens of thousand of extremely minor “injuries” that the body has to repair, every single day.

While neither system ever becomes 100% active or dormant, in times of stress, your fight or flight mode becomes more active and when you are resting or sleeping your rest and digest mode becomes dominant. The problem is, it is difficult for the body to heal when it has a multitude of battles to fight and different stresses to respond to. In today’s world, we are rarely unplugged. We are constantly trying to get more done and we are bombarded by entertainment and information that is meant to be stimulating. While this does not put us into full on fight or flight mode, it does put us in to a low level of sympathetic dominance that is insidious and even encroaches on our sleep. And what are we supposed to be doing when we are sleeping? That’s right, repairing, rebuilding, regenerating. What does your doctor tell you to do when you are sick? REST! That’s why when people go on vacation, removed from stress, they feel better and heal quicker.

From my clinical observations, the use of certain acupuncture points puts people in to a deep state of parasympathetic dominance very quickly.  That is why many people feel so rested and relaxed after a treatment. Couple this with the fact that the other needles have been inserted to “guide” the healing resources to specific areas, and you have a powerful means of healing.

The Nerve – Reflex Association – The Nerve-Reflex Theory was developed by a team of Japanese physiologists in the 1950’s.  It showed the reflex interactions between the periphery and the autonomic nervous system. They showed that the cutaneous surface (skin) and the viscera (organs) are connected and abnormalities of the internal organs can manifest themselves on the surface of the body by way of spasm, referred pain or redness.  Stimulation with acupuncture needles creates an inverse reaction causing changes to blood and lymph flow, thereby reducing symptoms.

The HPA Axis – The hypothalamus-pituitary-adrenal axis is a major part of the neuroendocrine system that controls reactions to stress and regulates many body processes, including digestion, the immune system, mood and emotions, sexuality and energy storage and expenditure. Acupuncture has been shown to have a positive influence on this complicated system, in recent research.

For most people, the why is not as important as the fact that it does work.  And despite it’s difficulty to measure how scientifically, acupuncture is wildly effective at treating an broad range of ailments from mood disorders, all types of pain disorders, gastro-intestinal issues, vision issues, neurologic issues, fertility issues, sleep disorders and more.  So what are you waiting for?  Schedule an appointment today and find out how acupuncture works for you.